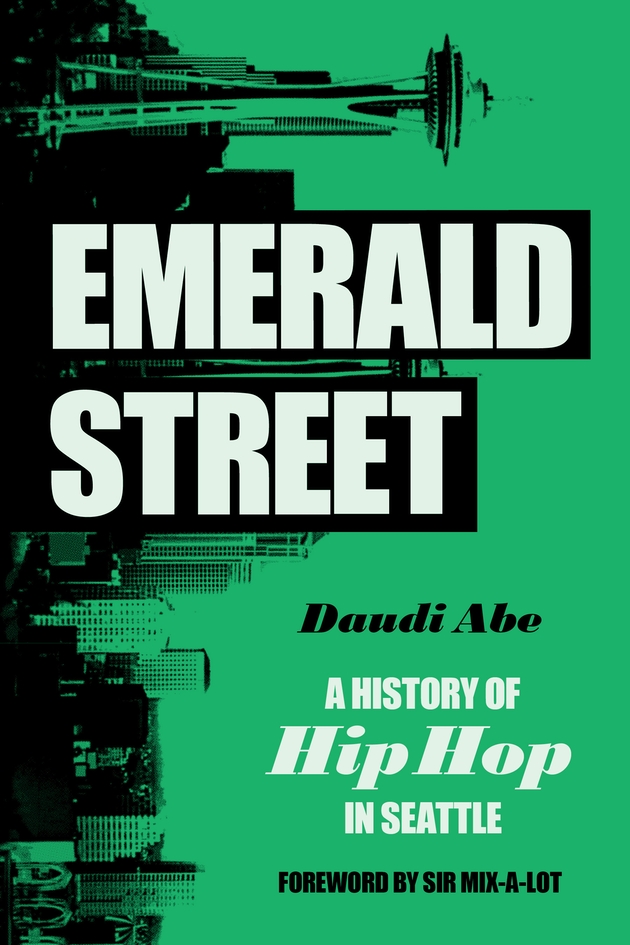 From the first rap battles in Seattle’s Central District to the Grammy stage, hip hop has shaped urban life and the music scene of the Pacific Northwest for more than four decades. In the early 1980s, Seattle’s hip-hop artists developed a community-based culture of stylistic experimentation and multiethnic collaboration. Emerging at a distance from the hip-hop centers of New York City and Los Angeles, Seattle’s most famous hip-hop figures, Sir Mix-A-Lot and Macklemore, found mainstream success twenty years apart by going directly against the grain of their respective eras. In addition, Seattle has produced a two-time world-champion breaking crew, globally renowned urban clothing designers, an international hip-hop magazine, and influential record producers.

In Emerald Street, Daudi Abe chronicles the development of Seattle hip hop from its earliest days, drawing on interviews with artists and journalists to trace how the elements of hip hop—rapping, DJing, breaking, and graffiti—flourished in the Seattle scene. He shows how Seattle hip-hop culture goes beyond art and music, influencing politics, the relationships between communities of color and law enforcement, the changing media scene, and youth outreach and educational programs. The result is a rich narrative of a dynamic and influential force in Seattle music history and beyond.

Emerald Street was made possible in part by a grant from 4Culture’s Heritage Program.

-- Language from University of Washington Press

Thursday, May 13th 12:00 pm - 1:00 pm PST: We are hosting Dr. Daudi Abe for a discussion of hip hop, community, and Seattle history from his latest book, Emerald Street: A History of Hip Hop in Seattle. Conversation curated by Community Advocate and Youth in Focus Administrator, Ashley Marshall (MFA 21), and moderated by Arts Leadership Professor, Roxy Hornbeck, MFA. (To RSVP for this session, please claim a ticket here)

Friday, May 14th 12:00 pm - 1:30 pm PST: We are expanding our music conversation with an interactive roundtable discussion on the “State of Music” as a site of resistance and liberation. Come ready to talk about music, listen to some music, and engage as a community with lead singer for Kore Ionz and co-founder of Totem Star, Daniel Pak; Assistant General Manager of the Showbox, representative of Keep Music Live, and 32-year music worker Shannon Welles (MFA 19); and Hip Hop artist, cultural worker, community organizer, and co-founder of Forever Safe Space, Julie-C (@joulsea). Moderated by Arts Leadership Professor, Roxy Hornbeck, MFA. (To RSVP for this session, please claim a ticket here)

Events are free and open to the public.