Art in the Law Library

Aspiration and Contemplation by Jacob Lawrence 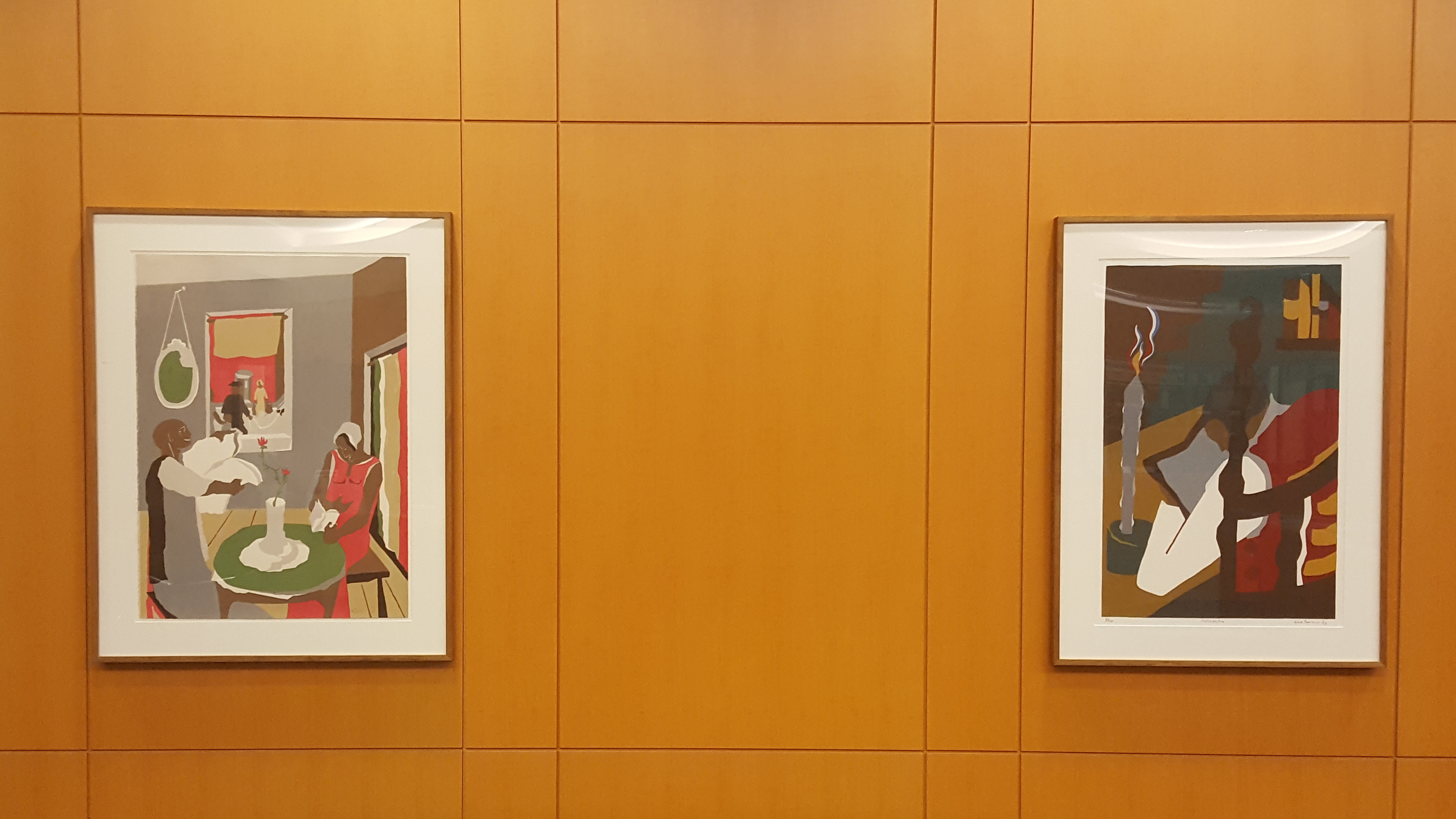 Jacob Lawrence, one of the greatest American figurative painters of the twentieth century, was born and educated in Harlem in the 1930s. His work, uniquely expressive, graphic, and profound, has won him numerous awards and museum exhibitions throughout the world, and is held in the permanent collections of the Metropolitan Museum of Art, the Museum of Modern Art, and the Whitney Museum, all in New York; the Phillips Museum in Washington, D.C.; and the Vatican Museum in Rome.  In Aspiration, the man and woman are, through reading, acquiring knowledge and wisdom. The flowers are a symbol of birth, growth, hope, life, and energy. The human figure through the window represents the neighborhood and the family. The dog is a symbol of fidelity. Contemplation commemorates an important period in Haiti's history. "As Commander in Chief of the army, Toussaint saw to it that the country was well taken care of. The economy was returned to prosperity and slavery was abolished." --Jacob Lawrence 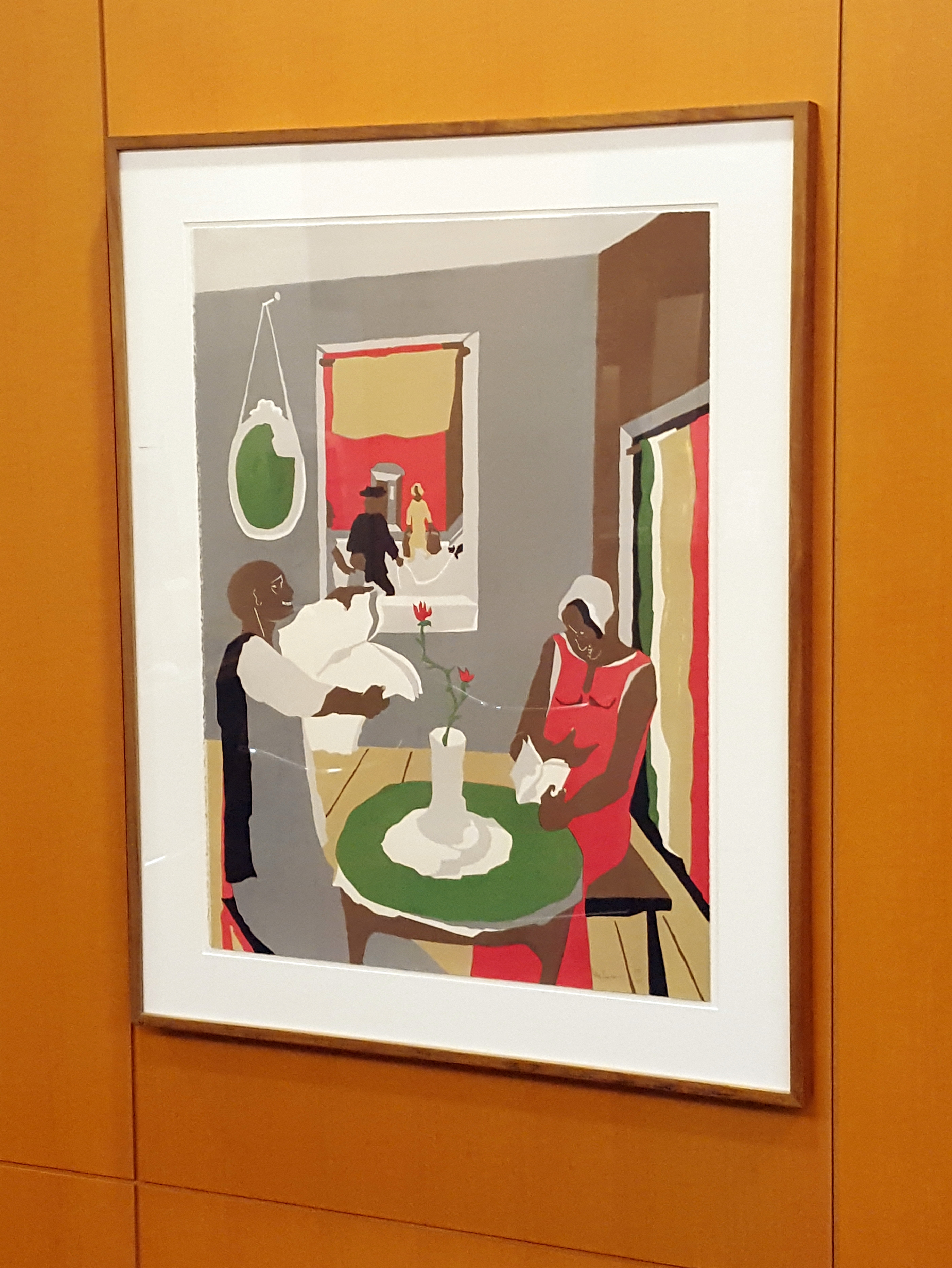 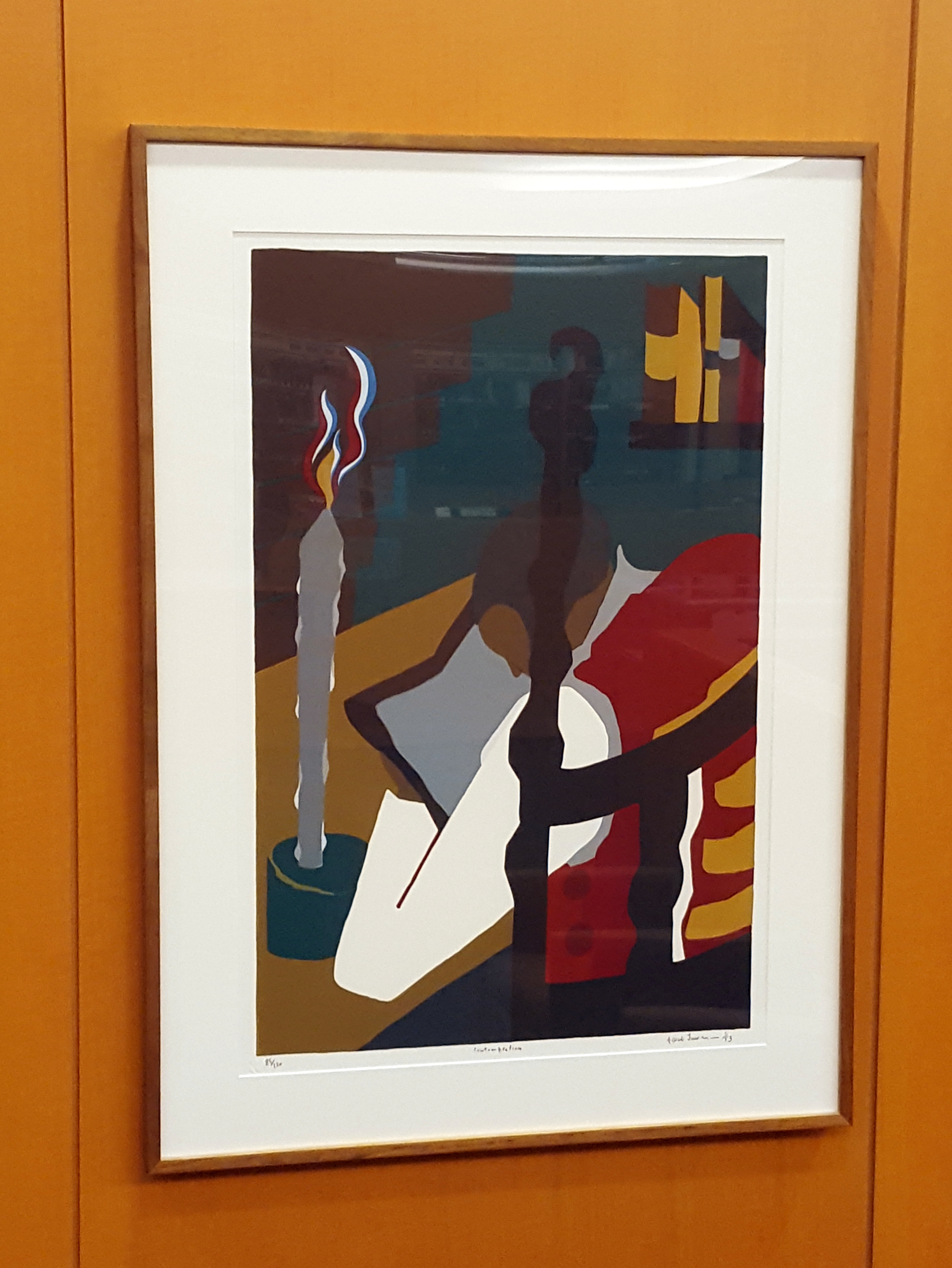 For Andy and Me by Donald Fels

For Andy and Me was donated by Tom Richardson, a colleague of Andy Walkover at the University of Puget Sound School of Law (1982-89), who along with so many family and friends will never forget him.

This wall sculpture pays homage to the artist's very close friend, Andrew Walkover (1949-1988). Professor Andy Walkover was a much loved and admired member of the University of Puget Sound School of Law faculty from 1978 until his death from cancer in 1988.

Visual artist Donald Fels has been active in the U.S., in Europe and Asia since 1976. He holds a B.A. in Art and American Studies from Wesleyan University, and an M.A. Ed. with Honors from City University where he was the Board of Governor's Presidential Scholar.

For Andy and Me
Wood, fiberglass, paper, pigments
1988 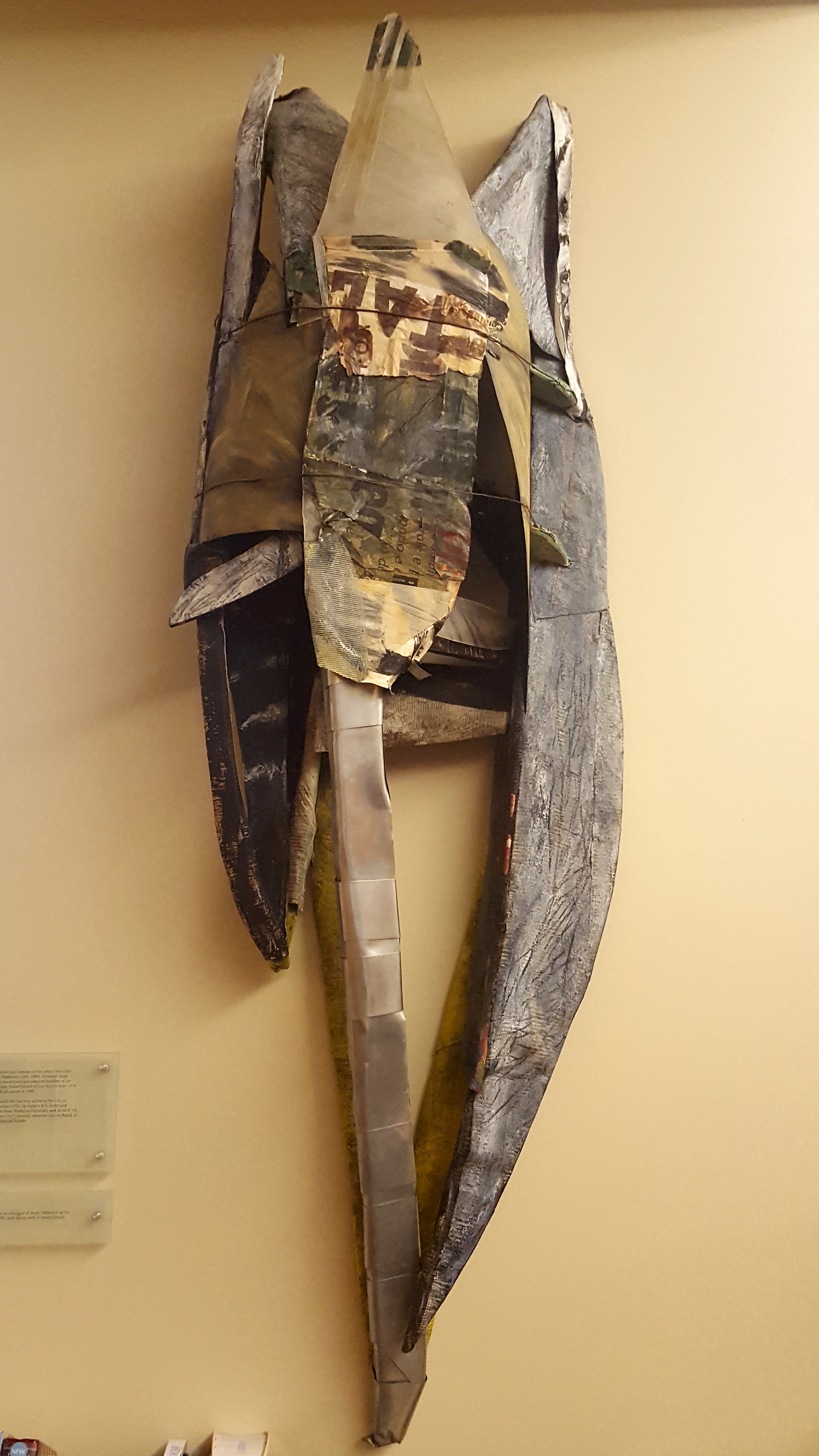 Column of Light by M.J. Anderson

One of the most visible pieces of art in the library is M.J. Anderson’s sculpture, Column of Light, at the base of the stairs on the 2nd floor. Commissioned specifically by the Seattle University Law School in 2000, the statue was first carved from marble in Carrara, Italy, before arriving in the Law Library. Anderson, one of the best-known sculptors in the Pacific Northwest, says she sculpts in stone because “it is the least artificial of art forms and the most enduring to our humanity… I try to carve what it feels like to be human, to convey the unspoken emotions of our being here, to create an image of the intangible.” One side of Column of Light displays the sculpted hands down in a gesture of giving and receiving of truth and wisdom, which then guide interpretations towards ideas of God, nature, and humanity. Another side displays hands upward in a gesture of self knowledge and learning. 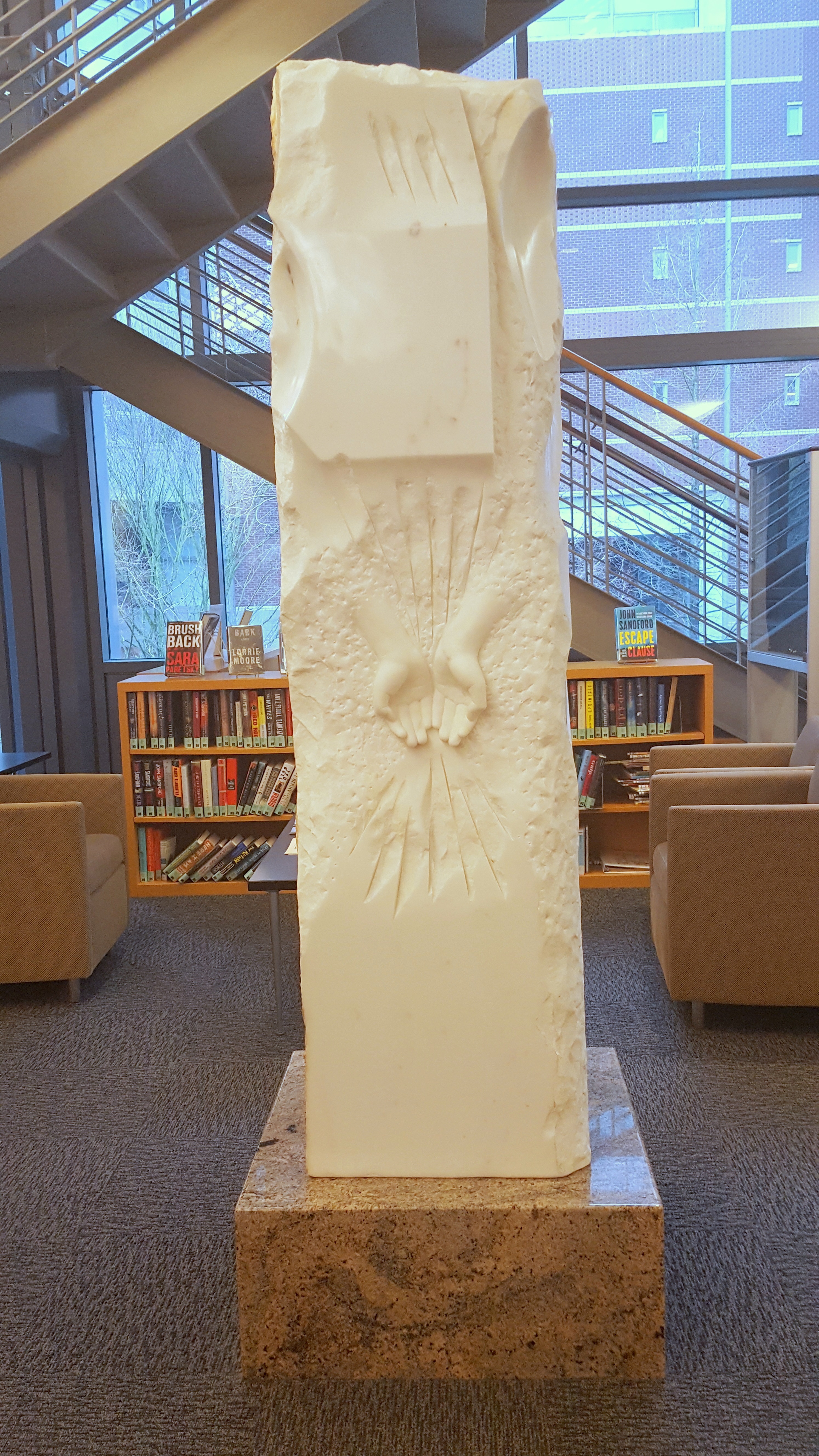 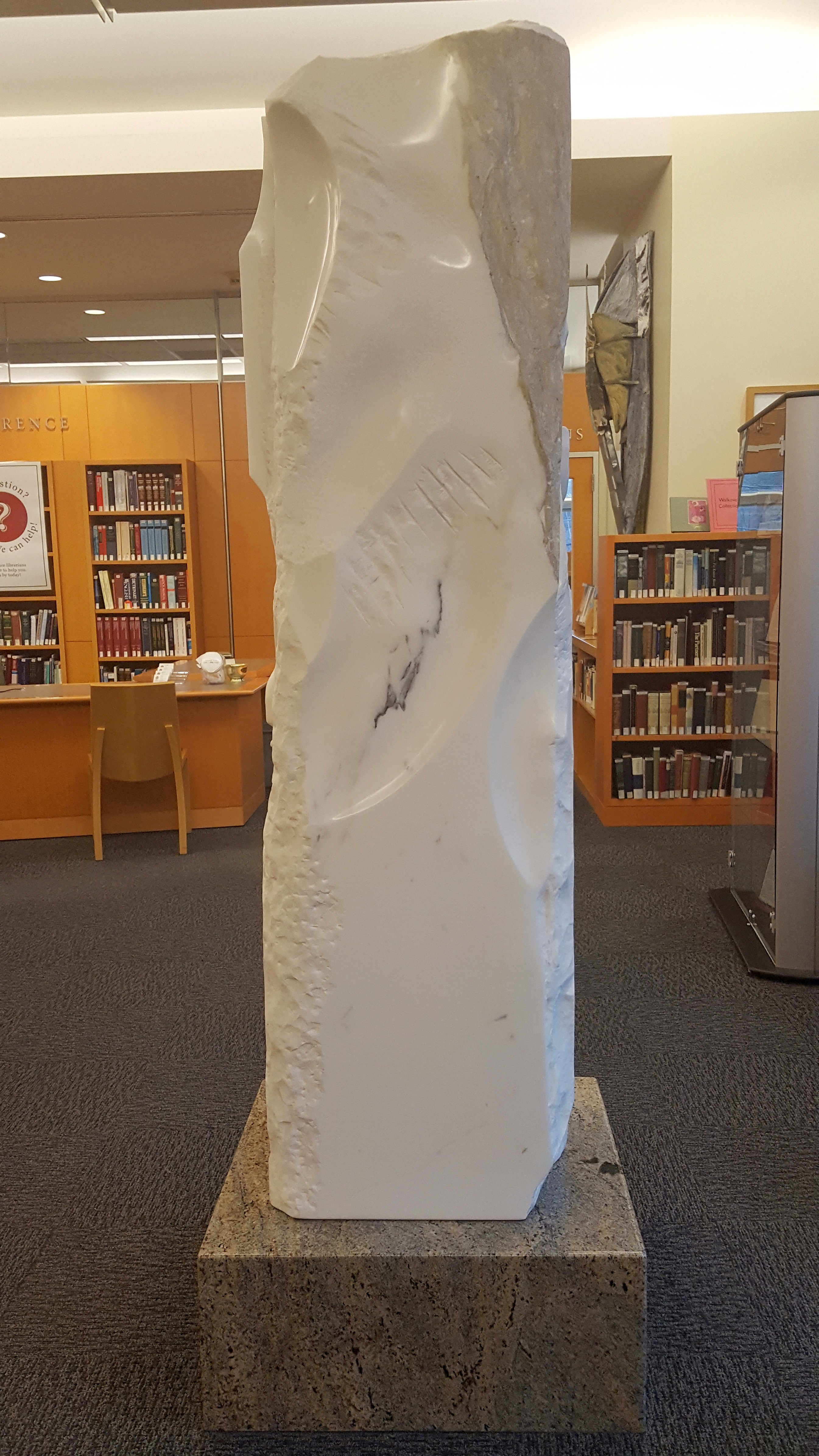 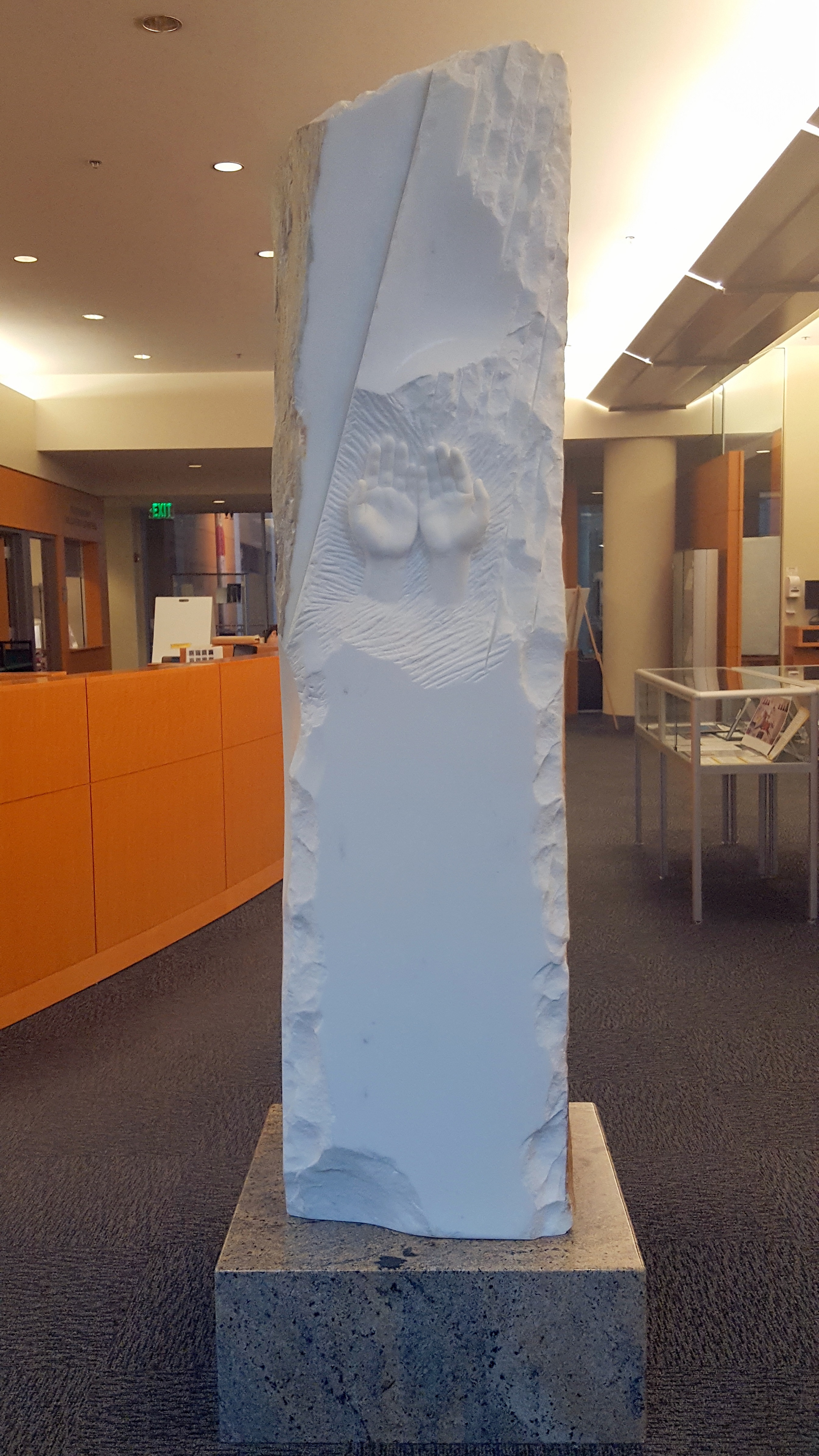 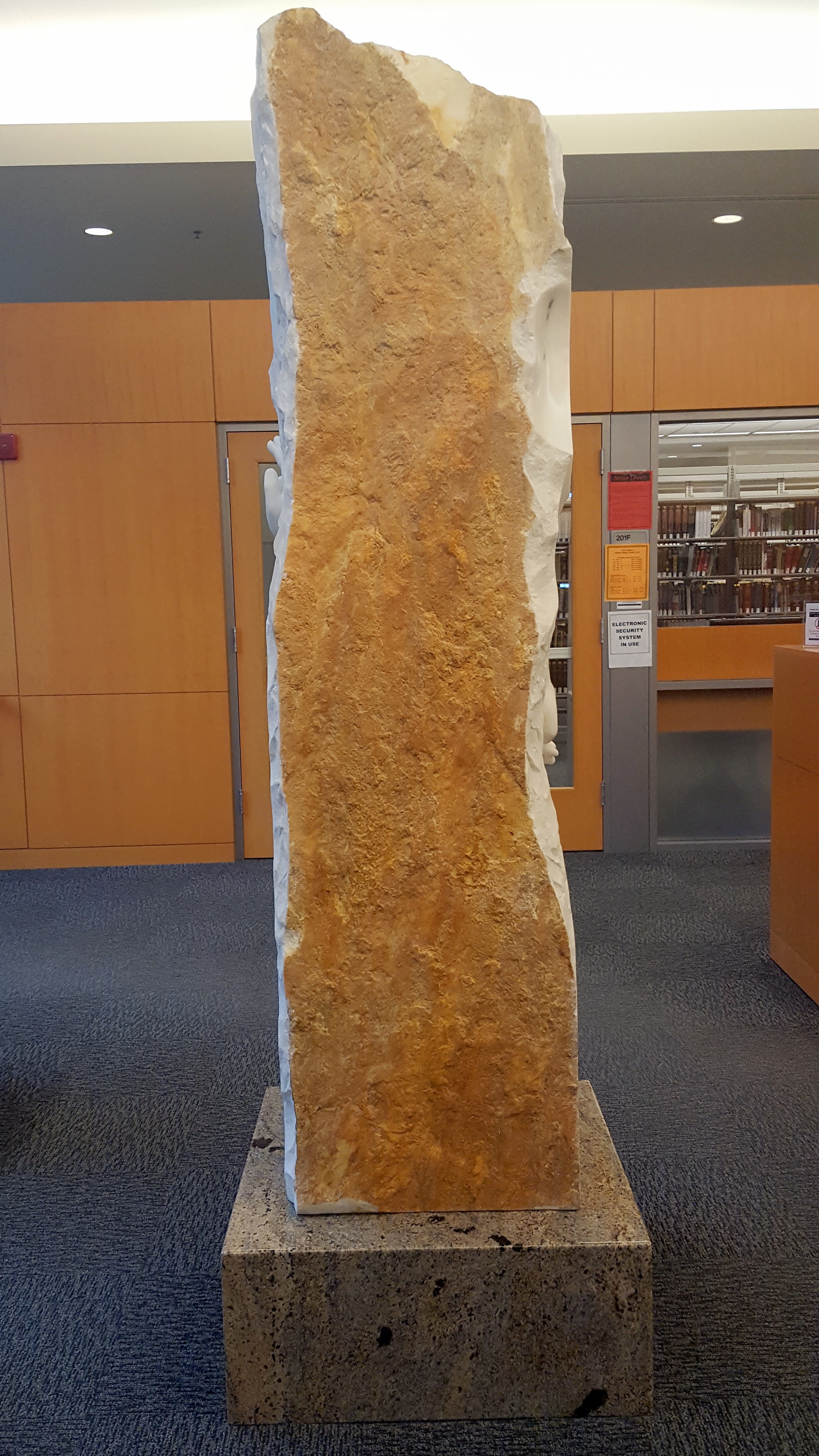 Kenna Moser received a Western States Arts Foundation / National Endowment for the Arts Regional Fellowship for painting. Museum exhibits include the San Jose Museum of Art, the Boulder Museum of Art and the Tacoma Art Museum. Moser's work combines a sense of the artist's sketchbook and the scientist's notebook. Conveying the reverence and nostalgia of icons, Moser attempts to illuminate the bonds between matter and spirit. 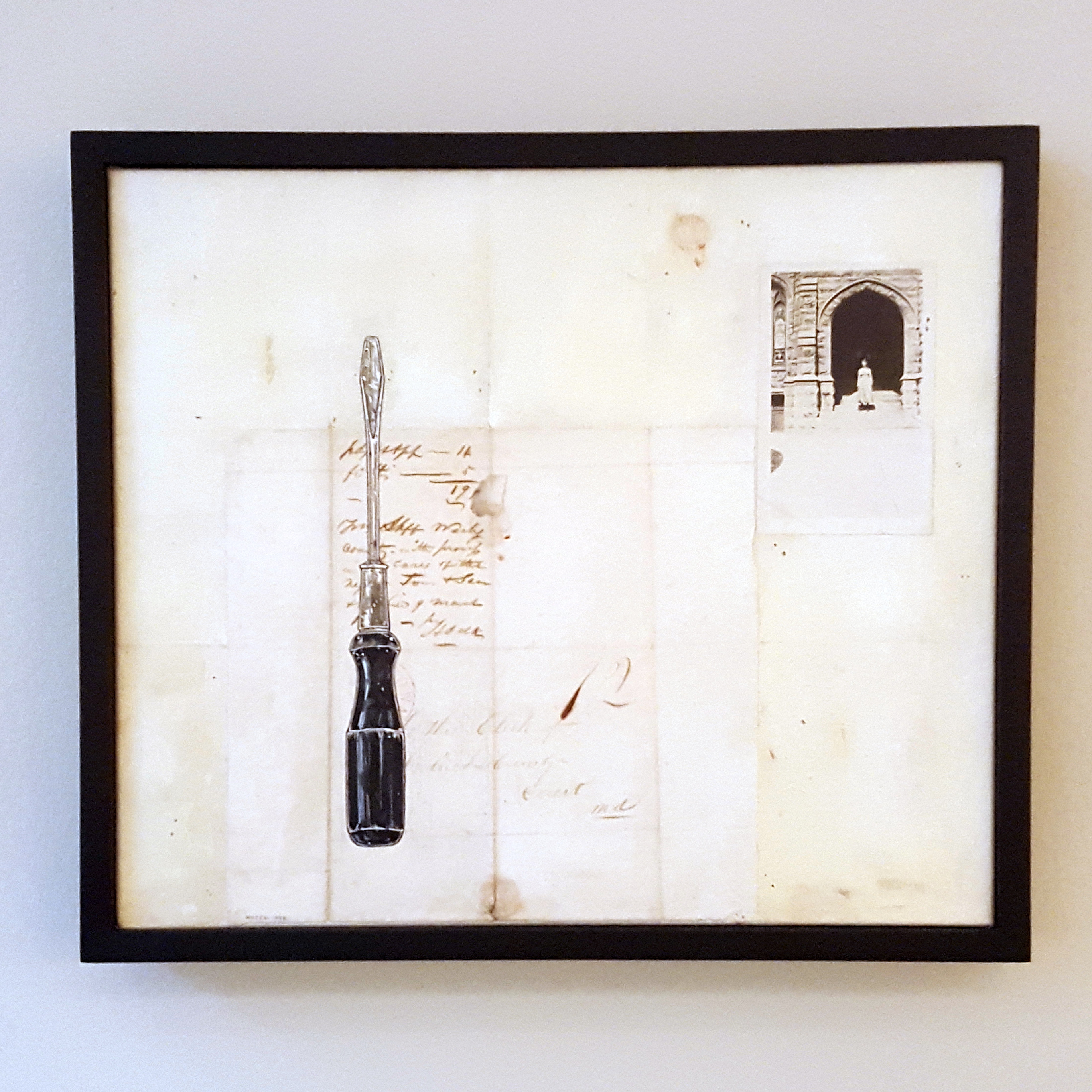 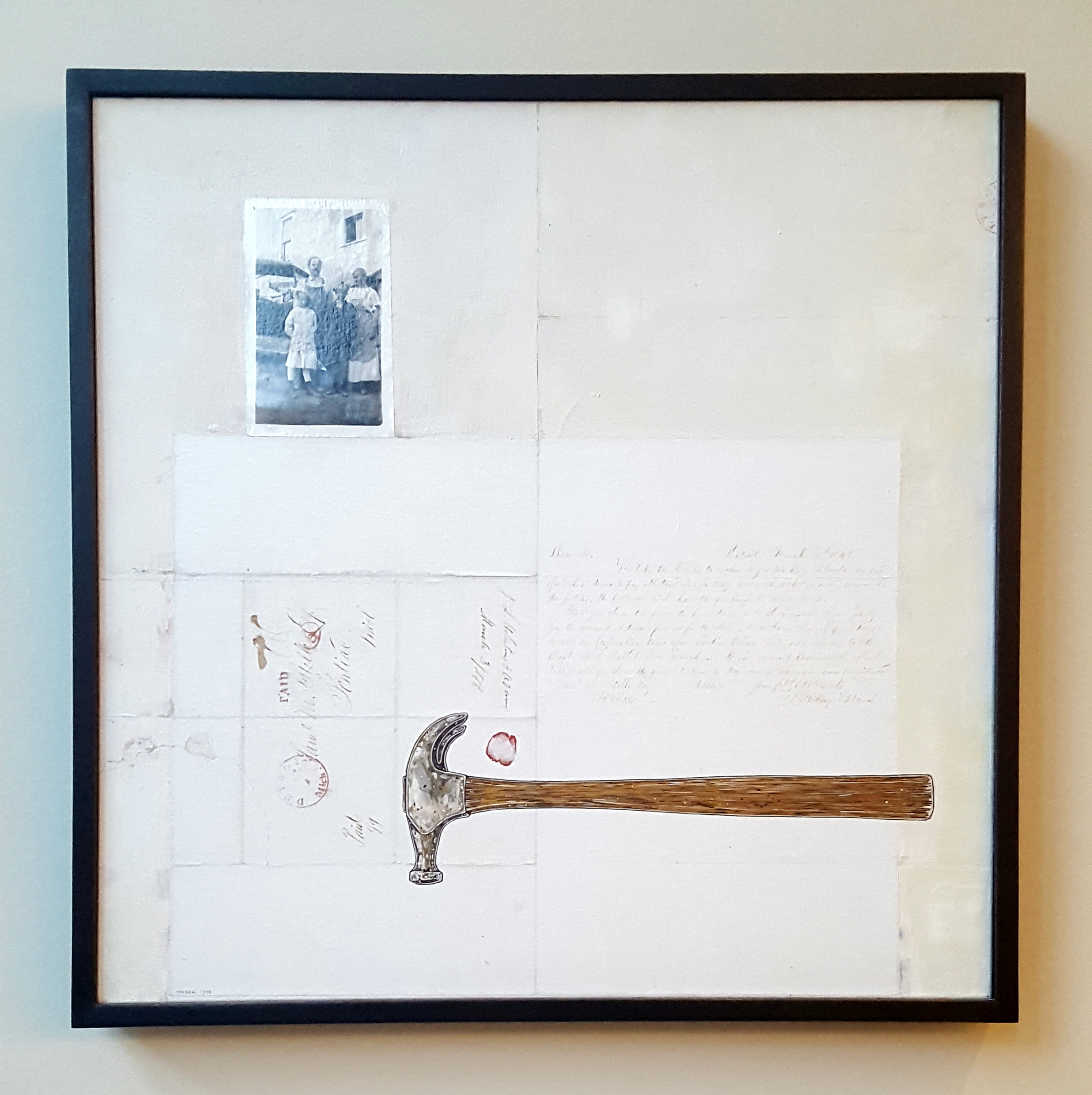